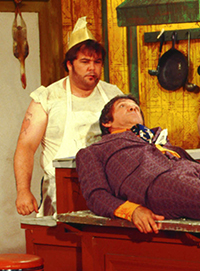 It was Roy Clark who brought Gailard Sartain to the attention of HEE HAW producers.

Gailard began to develop his comedy and improvisation skills on his own TV show back in Tulsa, but they were magnified and sharpened on HEE HAW. Whether it was as Maynard in “The General Store,” Orville in “Lulu’s Truck Stop,” Officer Bull Moose, or the trucker in the CB Radio Spot with Kenny Price, Gailard’s brand of humor was unique. Directors Robert Altman and Alan Rudolph noticed him early on, and he appeared in several of their movies.

Gailard is also a talented graphic artist, and you can get a closer glimpse of him at his official website: www.mazeppa.com.