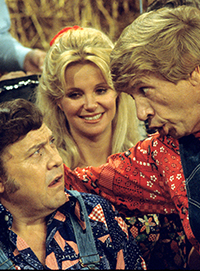 Kenny Price, whose successful recording career proclaimed him “The Round Mound of Sound,” had been such a popular music guest on HEE HAW that he was asked to join the cast in 1974. Kenny’s popular HEE HAW characters included “The Sheriff,” Linda Thompson’s farmer-father in the “Farmer’s Daughter” and allowing his inner-child to run wild, as Elrod, the son of Ida Lee and Laverne in the “Naggers.”

His warm personality and generosity made him a beloved member of the HEE HAW cast. But it was his singing voice that made him the heart and soul of the HEE HAW Gospel Quartet with Grandpa, Buck, and Roy.

In eulogizing Kenny, Nick Clooney, father of George Clooney, said: “He had the common touch, but was an uncommon person.”