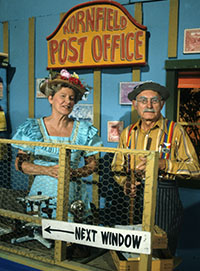 It would be hard to find a performer in the realm of comedy or country music who could touch the legend of Minnie Pearl. She was born Sarah Ophelia Colley in Centerville, Tennessee, although she always referred to her hometown as “Grinder’s Switch” in her comedy routines. Her humor and personal grace made an indelible impact on America and the rest of the world. With her cheery, shrill “HowDEE! I’m just so proud to be here!” Cousin Minnie Pearl joked her way onto the radio as a member of the Grand Ole Opry, onto the TV screen, and into the living rooms and hearts of America.

She appeared on many network television shows, but it was an appearance on ‘The Jonathan Winters Show’ that brought her to the attention of the producers of HEE HAW in 1969.

Wearing her frilly dress and her ubiquitous straw hat with its dangling price tag of $1.98, she remained one of the most beloved stars of the HEE HAW cast throughout her twenty years on the show as the teacher trying to keep her students in line in the Schoolhouse, as the editor of the ‘Grinder’s Switch Gazette’, as the leader of the ‘All Jug Band’, in ‘Minnie’s Quilting’ sketches, and in the riotous ‘Cooking Spot’ with Grandpa Jones.

Offstage, Sarah and her beloved husband of 49 years, Henry Cannon, were virtually inseparable. She worked tirelessly for various charities, including the American Cancer Society. It was well-known that Sarah was a breast cancer survivor, and the HCA/Tri-Star Hospitals in Middle Tennessee honor her memory with the Sarah Cannon Cancer Center.

Minnie became a member of the Grand Ole Opry in 1940 and of the Country Music Hall of Fame in 1975.