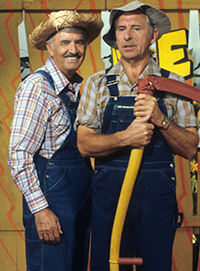 The ultimate utility player, Gordie Tapp had viewers tuning in week after week to see if he would push Ida Lee a little too far in “The Naggers” or beat Archie to the raspberry in “Pfft! You was Gone.” Many of his sage quotes as “The Old Philosopher” have become reliable one-liners in glib conversation. He is also remembered as the proprietor of “The General Store” and as one of “The Culhanes'” sitting on the sofa.

Gordie was not only a member of the HEE HAW cast, he was one of the original writers who created many of the memorable sketches and their characters.

He has been awarded the Order of Canada as well as the Order of Ontario for his work and travel on behalf of charitable and government causes.