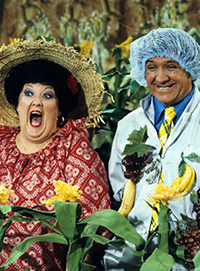 George’s character, Goober, has long been a favorite of television viewers who first met him on The Andy Griffith Show and Mayberry, RFD.  He made two guest appearances on HEE HAW before he officially joined the cast in 1972. He appeared as Goober in “Goober’s Garage” and in “Goober and Gailard.” He also appeared as the postman in the “Post Office” spot. But it was George, appearing as himself, who sported the outlandish hats and clothes in HEE HAW comedy segments like the “Truck Stop” and “Judge Spot.”

Looking at either of those incarnations, it’s hard to imagine that George was a science teacher before he became an actor. Here is a very curious note: George was Gene Roddenberry’s original choice for the role of Spock on ‘Star Trek’!

George was a founder and supporter of the annual television/film festival at his Florence, Alabama alma mater, the University of North Alabama. Check it out: www.lindseyfilmfest.com.