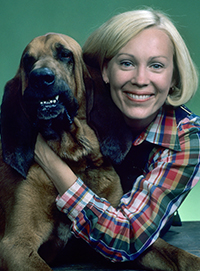 Legend has it that Lana Turner was discovered at the soda fountain at Schwabb’s Drugstore in Hollywood, but our “Miss HEE HAW,” Cathy Baker was discovered while working as a scenic painter at the television studios in Nashville where HEE HAW was being taped in 1969.

Cathy’s bright smile and shiny hair were captivating, and she developed an instant following.

While the other female cast members were usually clad in more alluring outfits, Cathy was dressed in overalls or a modest dress.

Every week, it was Cathy and her bubbly personality that delivered HEE HAW’s trademark closing line: “That’s all!”