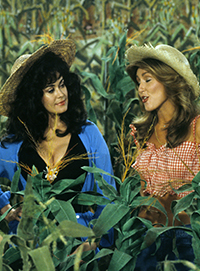 Beginning her career as the 1972 Miss Tennessee USA, Linda’s combination of Southern beauty and great comedic timing enabled her to appear in many HEE HAW segments – most notably as the “Farmer’s Daughter” with Kenny Price as “Paw.”

In 1993 she was nominated for an Academy Award for the song, “I Have Nothing,” which she co-wrote with well-known record producer David Foster, for the movie ‘The Bodyguard’. In 2002 Linda and David won an Emmy for the song, “Aren’t They All Our Children,” for ‘The Concert for World Children’s Day’.

During her early years as a working actress in Hollywood, Linda met and later married Olympian, Bruce Jenner. Together they had two sons—Brandon and Brody—whom Linda considers her life’s greatest accomplishment.