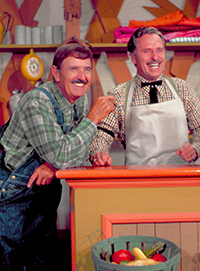 In 1969 Archie joined HEE HAW as a writer and cast member. From the show’s inception, Archie was the comedic foundation of some of its most popular skits and characters: the gregarious barber spinning yarns to a shop full of customers, the quack doctor, and the gavel-pounding judge.

Some of his better-known stories were his clever spoonerisms: “Rincercella,” “Beeping Sleauty,” and “Pee Little Thrigs.” In “Pfft! You Was Gone,” it was always fun to see who would deliver the bigger raspberry: Archie or Gordie.

During his HEE HAW years, Archie also recorded several comedy-music albums such as ‘Bull Session at Bull’s Creek’ with Junior Samples and Archie Campbell. He was named Comedian of the Year in 1969 by the Country Music Association.