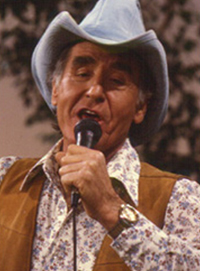 Sheb was there in the beginning when a theme song was needed for HEE HAW. This man, who had earlier written “Flying Purple People Eater,” came through. He got the Town and Country Singers (later renamed The Nashville Edition) into the studio to record it, and, as the saying goes: “The rest is history.”

Besides being the man behind the musical signature for HEE HAW he was also a member of the HEE HAW cast that first season. He was a well-known dramatic actor, yet he had the perfect comedic timing needed for “The Cornfield,” “The Board Fence,” “The Moonshiners,” and “The Haystack.”

Read more about this fascinating guy at: www.shebwooley.com.